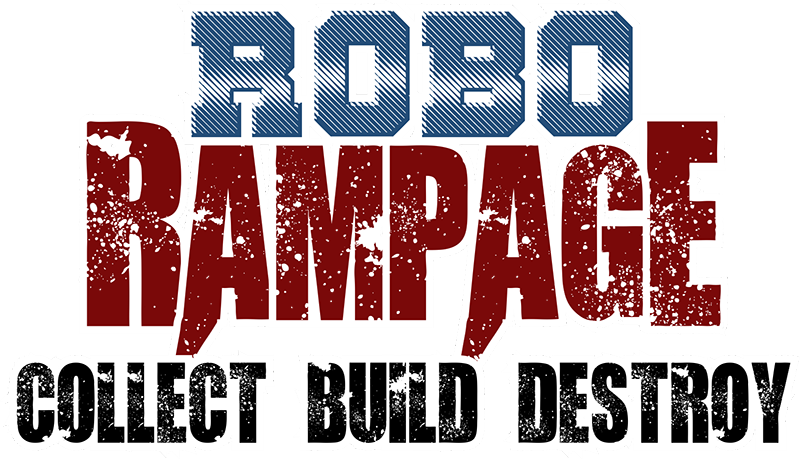 Welcome to Robo Rampage, an NFT blockchain-based game pitting Rampager against Rampager in a strategy battle.

Players collect robots (Rampagers). Improve their Rampager by adding weapons, armor, driving skills, and other items, owning every piece of their Rampager as a collectible asset.

The goal is to build the best damn robot you can assemble. Once it’s ready, there’s no working together to bring peace to the universe and build a community of harmony.

The time is upon you to seek out your opponents and destroy them!

Rampagers challenge random opponents or a specific user, seeking to defeat them and own a piece of their fallen enemy forever. But be careful; losing a battle may mean losing a piece of your Rampager. And what’s gone is gone for good.

If one opponent isn’t enough, throw your hat in the ring against nine other competitors in a winner-take-all Robo Royale.

August thru September 2021 – Reveal of the Premium XenoBot Robots

The first available collection (referred to as XenoBot Phase 1 Mint) will be composed of 6,000 robots of various XenoBots and rarities. Not all XenoBots will have the same rarity scale.

Each Rampager will have five card stats that will potentially impact their performance during Robo Rumbles. In the future, extra stats may be added. 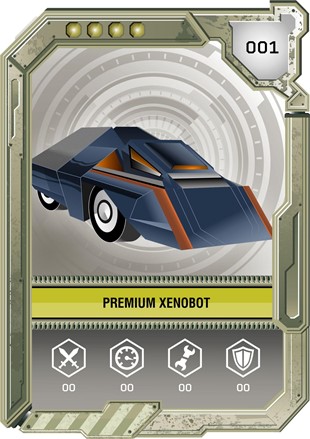 ***Note – Attributes are based on a XenoBots rarity and fall into the ranges below. It is possible (and highly likely) that robots with the same XenoBot and same rarity will still have minor differences in their attribute scores; however, the damage range will be the same.

All attribute scores can be increased or decreased with Enhancements. 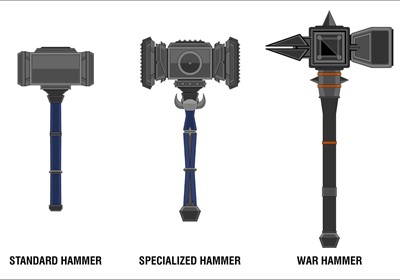 Players can enhance their robot with MORE THAN 100 DIFFERENT accessories, including weapons, armor, driving skills, motors, batteries, defense, and more. These collectibles belong to the owner and can be sold on the marketplace or used in the game.

Each enhancement will increase or decrease an attribute, so strategy and planning are essential.

Rampagers can access their XenoBot Enhancements through the Inventory Portal in the game. 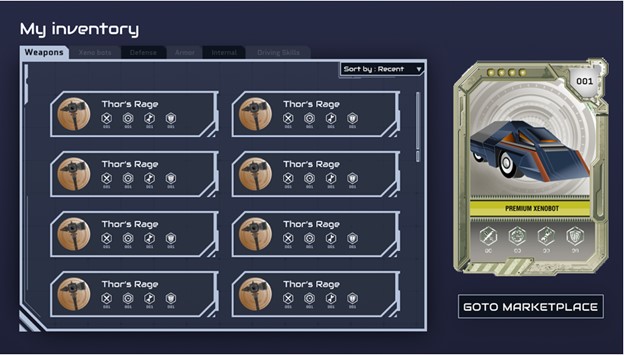 Each XenoBot can be enhanced with either four, six, or eight accessories, depending on the bot. There are maximum limits for each accessory:

Collectors will have the opportunity to mint 6,000 premium Rampager XenoBots this fall. Each Rampager  XenoBot is a robot with an attached weapon, bolstering attack, speed, defense, and/or hit points. This weapon cannot be lost in battle. It is part of the robot itself. The Rampager, along with the weapon, is owned and can be sold on the marketplace, but they are a single NFT and always stay together.

Content:         1x XenoBot with a weapon (Distribution broken out above)

The Mint Premiere Event is anticipated to take place during Q3 2021. Users will be limited to minting 10 Premiere XenoBots at the event. The event will occur on the web at mint.roborampage.io

A queue or white list may be established an hour before the minting event. Fifteen minutes before minting begins, those waiting in the queue or on the white list will be randomly assigned a position. Once the mint opens, users will have a full day to mint their Rampager XenoBot or be removed from the line. Using random assignment provides an equal opportunity for everyone to mint a Rampager XenoBot during the event.

Collectors will have the opportunity to buy three different packs, one to fit every budget, each offering a different number of NFTs and a minimum rarity level.

Rampagers can fight friend or foe. Players can enter the Arena portal and choose a RoboDome. They will be randomly matched with an opponent. In order to maintain fairness, a Rampager can only battle an opponent whose rank is no more than one higher or lower than the Rampager. Alternatively, a Rampager can issue a challenge to a specific user or be challenged by another user. Acceptance of that challenge will be considered a match.

Once a match is made, Rampagers will be given up to 60 seconds to analyze their opponent. Once they click “PREPARE,” they will have another 60 seconds to swap out equipped Enhancements with unequipped Enhancements they hold in their inventory if they believe it will increase their chances to destroy an opponent along with their strategy. Strategies include, but may not be limited to:

-FLANK (Get Beside/Behind) – Strategy based on speed, getting into position either behind or beside opponent to increase attack potential

Each strategy will increase or decrease attack and defense attributes. Matching proper Enhancements with each strategy may be the difference between victory and annihilation.

Once finished, the Rampager clicks “FIGHT.”

The animated fight continues until a winner is declared by knockout. A knockout occurs when a robot’s health points are reduced to zero or the robot is propelled out of the arena. Duck!

Rampagers will have various opportunities to earn rewards using their strategy and skill.

All in-game assets will be non-fungible tokens (NFT) supporting the ERC-20, ERC-721, and ERC-1155 standards. Rampagers own their assets and may sell them on secondary markets. In the future, players may have the ability to trade them in-game. Following Play-to-earn principles, Rampagers may earn in-game assets through gameplay, tournaments, and future challenges. 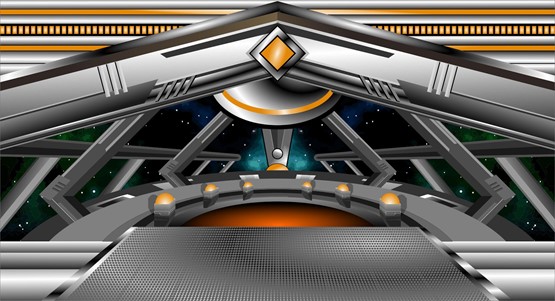 Rampagers have more to worry about than just the robot they face in the arena.

Players will have the opportunity to collect pads on the arena floor, walls, and ceiling. These limited-edition Arena NFTs enable an owner to place a Booby Trap inside the battle arena. Less than 1000 will be available! Additionally, each arena is themed (outer space shown here), and a holder of an outer spaced themed NFT not affiliated with Robo Rampage can win an Observation Arena Pad for no cost. These holders have a chance of catching a Rampager NFT drop. Odds are lower than an in arena spot but can be increased by adding a Booby Trap to their pad.

Arena Pad owners will also participate in the fees generated from any paid tournament that occur in the Arenas where they hold partial ownership.

Rampagers will have the opportunity, for a small charge, to:

to “weld” a new, collectible Enhancement NFT that will draw attributes from the existing collectible Enhancements, but the outcome may not always be completely predictable. The result may be a slightly upgraded version of one or the melted down items or it could be a new, never-before-seen weapon, armor, or accessory collectible fully usable for your Rampager XenoBot.

The Robo Overlords understand weak and feeble humans need their disgusting habit of sleep. Although XenoBots and Enhancements may require short cool down periods, they can continue battling while their Rampager (owner) sleeps.

Rampagers can stake their XenoBots and Enhancements with the Robo Overlords in the Experimental Facility for a period of 24 to 72 hours.

For a small fee, shared by the NFT owner and the Robo Overlords, other Rampagers may borrow XenoBots or Enhancements from the Facility and test them out in battles. Those battles occur in a Scrimmage Arena, where NFTs cannot be won or lost. Rank matching is more relaxed, so Rampagers in the Scrimmage Arena can battle a wider variety of opponents and test out new strategies or different Enhancements on their XenoBots they currently do not own.

In the near future, Robo Rampage will introduce NanoScrap (SCRAP), an in-game token currency that Rampagers will be able to earn through battles, tournaments, and league participation. SCRAP can be used to upgrade Enhancements, as tournament entry fees, and to purchase Base Metal and Rare Metal packs plus other uses the Robo Overlords will announce as time passes.

For those craving some competitive fun for bragging rights only, public leagues will be available to join. Leagues of six and eight Rampagers will be open initially with a goal of adding ten team, twelve team, and private leagues by the end of Q2 2022.

In league play, Rampagers will battle each other in a round robin season with the top two record holders battling it out to be the league champion.

KNOCKOUT – Win or go home. There is no second place in Rampager Knockout tournaments. Sixteen Rampagers are paired randomly at the start of the tournament. The rules are simple: win and move on. Lose and you are out. Last Rampager standing will be crowned King of the Scrap Heap.

Tournaments will range from $1 to $5 to enter with a Silver, Gold, or Titanium rarity collectible NFT waiting for the King.

STOCKYARD BRAWL KNOCKOUT – Another win or go home tournament, but with a twist. The only thing Rampagers bring to this battle is a small entry fee. Once the tournament begins, every Rampager will get to choose their XenoBot and 8 Enhancements from the community pot over 40+ Enhancements. After all, sharing is caring. More than one Rampager can select the same XenoBot or the same Enhancement.

Rampagers will have five minutes to assemble their XenoBot using 4 of their selected Enhancements before the tournament begins. Each fight will follow the Game Play rules, and fights will continue until only one Rampager remains.

FREE FOR ALL – Robo Rampage will also host free tournaments based on ranks during which Rampagers play to earn in-game assets. Winning the tournament will not be a requirement to earn a collectible asset, but to the victor go the best spoils.

Acquisition and Sale of Collectibles

Rampagers will be able to acquire XenoBots, XenoBot Enhancements, Booby Traps, and Arena pads using a MetaMask wallet. OpenSea will be linked, allowing for buying, selling, or auctioning of a collectable NFT asset.

Whether you are a casual Rampager or a hard-core battle veteran, you can check out your conquests and scars, including your win-loss record, fastest knockout, and longest win streak. The best of the best will be elevated to the Robo Rampage Hall of Fame.